In April 2014 Peter Garsden of Abney Garsden Solicitors published an article entitled 'Is it reasonable to advertise for Savile compensation ?' which included this interesting piece of information

This followed Justice Sales' High Court decision agreeing a scheme that would enable PI claimants to have their claims made as soon as possible and with the LEAST EXPENSE !

I don't intend to go over old ground again and again. But, the more I read the decision the more I understand the frustration of the individual beneficiaries especially, let me explain !

When Liz Dux of Slater and Gordon Solicitors announced that she was representing in excess of 120 'VICTIMS' of the late Sir Jimmy Savile, she DID NOT use the word ALLEGED ! Her claimants were/are 'victims' she appears to be certain of this.

If a person with a personal injury claim against the estate (and, as may be, against a Third Party Defendant) chooses to make an application under the Scheme, the Bank (and any relevant Third Party Defendant) will be required to consider the claim according to a set time-scale and procedure and to decide whether to accept or reject it. The consideration of the claim will involve all relevant evidence in relation to it being referred to a barrister to review. The barrister will then produce a recommendation whether the claim should be accepted, rejected or accepted in part.

So, Osbourne Clarke solicitors for Nat West Bank have 56 days to either 'accept or reject the claim' have I got that right ? Go back to the first point, the consideration of the claim MUST 'involve all relevant evidence' for review by a barrister who makes his/her decision !

Here's where it gets sticky : COST !

Similar to 'road traffic accidents' not wishing to be flippant but I think we would all agree that 'scrutiny' in this instance would at the very least involve, establishing that the RTA had actually TAKEN PLACE ?

I include the following three important paragraphs from JS AGAIN. The reader is urged to consider these words carefully. The meeting he's referring to, took place over two days(24/2/14 - 26/2/14). The claimants' lawyers had some issues with the SCRUTINY process ! 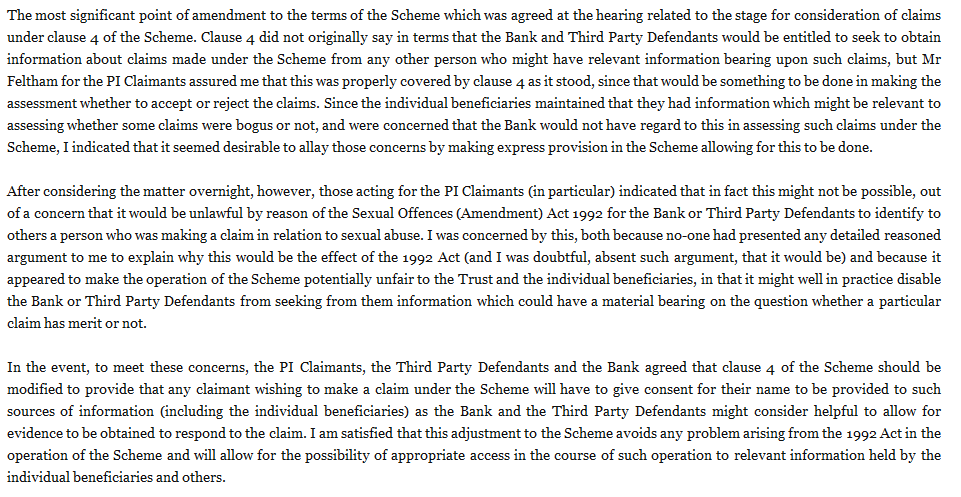 Were the claimants' legal team effectively trying to PREVENT the bank and the BBC etc from obtaining information 'from any other person who might have relevant information bearing on such claims'. Surely not, after all, the Lord Justice did use the word 'fair' did he not ?

Perhaps it was this particular line that worried them ?


Since the individual beneficiaries maintained that they had information which might be relevant to assessing whether some claims were bogus or not, and were concerned that the Bank would not have regard to this in assessing such claims under the Scheme

2) The Trustees objected to the scheme per se

But, getting back to the claims themselves

I broke the paragraph down for easier reading !

JS is confidant that the Executor will carry out it's duties in a fair and expedient manner. He refused the Trusts application to have them removed

The barrister will only see what he/she is given ?

Just because Nat West accepted the scheme DOES NOT mean mean that monies will be paid out to anyone ! But, I'm sure that you, like me are still unsure as to just HOW this will work in practice ! 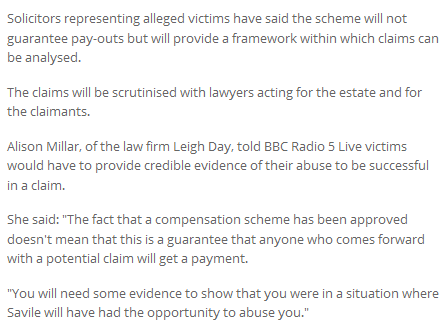 Remember, most of the estate was to left to the Jimmy Savile Charitable Trust. What input so far have they had in this ? Have their solicitors received any of the claims yet ?

There is NO REASON why the public should not be told HOW the scrutiny process is carried out. After all this is matter of PUBLIC INTEREST !

In the last 24 hours the press have printed the news that ONE of the THREE NHS reports due to be published THIS WEEK will not now be out until the autumn. I wonder how ROBUST Kate Lampards team have been in their pursuit of FACTS.

Ms Glover has been sent the following link to hundreds of pieces of EVIDENCE that could and SHOULD be used in the scrutiny process. WHY ? because it contains PROOF not hearsay, not gossip but PROOF of when and where Jimmy Savile was on SPECIFIC DATES AND TIMES !

Better still, these came from THE BBC who have a vested interest in ROBUSTLY SCRUTINIZING the claims. The NHS gets a mention too so Kate Lampards team have a similar DUTY. Here is the link, add it to my blog, Moor Larkin's and Anna Raccoon's as a STARTING POINT for your investigations.

I will forward this blog piece to the BBC and NHS so they won't be able to say they never had this information. At some point in the future, someone may decide to revisit re investigate and/or reopen the case for FURTHER SCRUTINY !

Because, for some of us it really isn't 'ABOUT THE MONEY'